One afternoon back in 2007, Katheryn Strang’s then 12-year-old son arrived home from school accidentally let the family’s new puppy Dutchess out who then and ran away.

As you could imagine the family were absolutely devastated at the disapearance of their newest family member. They searched for months including putting up lost dog posters around where they lived in Orlando, Florida as long with checking for their beloved puppy at their local animal shelter.

When their much loved Toy Fox Terrier did not return home and was not able to be found then it was assumed that she had either been hit by a car or was making a new life for herself somewhere else.

But 12 years later after Dutchess disappeared and when she was more then 1,600 kilometres away she was finally reunited with her her owner Ms Strang in Pittsburg in an animal shelter.

The story is quite remarkable when the now 14 year old Dutchess was found by a Pennsylvanian city resident hiding under a shed where she was found cold and alone.

She was then taken to an animal shelter where a microchip was found (a microchip is implanted in an animal and is a device used to track down an animals owner so needs to be updated as needed with the most current information). From this microchip the shelter was able to trace Dutchess back to her owner Ms Astrang who had moved from Orlando to Boca Raton in Florida.

Imagine Ms Strangs surprise when she received a phone call from the animal shelter saying that they had found her dog. Ms Strang then made the 11 hour car journey to Pittsburgh to collect her beloved Dutchess.

When Ms Strang collected her much loved and missed dog she cried as she had always held onto hope that she would one day return. 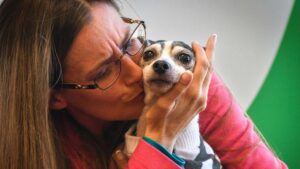 Staff at the animal shelter then posted on facebook of the reunion and wrote, “This is why we do what we do.” Ms Strang then wrote , “Dutchess. Hi, baby. I missed you. Your face is all white”.

It has remained a mystery as to how Dutchess made it all the way to Pittsburgh or what adventures she had partaked in over the last decade.

The admissions counsellor Humane Animal Rescue Torin Fisher said that when Dutchess arrived she was hungry, nervous and in serious need of a nail trim but apart from that was in pretty good shape.

Ms Strang continued paying the annual microchip fee and kept her contact information continually updated when she moved jusr un case one day that call would come that he had been found.

At a news conferance Ms Strang said,” They are like your babies. You don’t give up hope”