Home
Dogs How To
How Old Should My Children Be When We Get A Dog?

Adding A Dog to your Family at the Right Time

Dogs are the perfect pet to add to your family as they are so cute and bring a lot of extra love to your life. Dogs are also great for your child to learn about companionship, taking responsibility and about having empathy for others.
Experts say that getting a dog in a child’s first year of life they have less chance of developing allergies and asthma later on.
However, when choosing to get a dog for your child/ren it should never be an impulse buy (an example is at Christmas when some people may buy a puppy as a cute Christmas present) as you may get the wrong breed to suit your family and your children’s age and size.

Is your Child Ready for a Dog?

Working out if your child is ready for a dog depends on if you expect them to actually help take care of the dog or if the majority of the work will be taken on by the parents which is usually the way. Dogs have a long life span and you need to be ready for all the extra work you will need to do especially if you only have younger children when you first obtain the dog as they won’t be able to take on as much responsibility.
Lets have a look at different age groups to see what age is a good one to get a dog.

As a rule when a child is younger then six years old then it is better to get a dog that is at least 2 years of age. This is because of the following reasons:

Safety: Puppies are just like young babies and so can be hurt easily. A young and curious child could accidentally hurt the dog by hugging them too hard or by pulling on their tail. This could make the dog scared of children for life and you cannot have a dog scared of a child they are around a lot. You also don’t want an untrained puppy jumping up and hurting a young child either.

Rough Play: Puppies have both sharp teeth and sharp claws. Just as babies and toddlers use their mouth to check things out so do puppies but their teeth are a lot sharper then a babies. Puppies aren’t always trained at first and tend to jump up more. Jumping up on a much older child or adult won’t due any damage but if they jumped up on a younger child they could knock them over and hurt them. Because of the risk of injury to either the child or puppy then they must be supervised at all times.

Advantages of getting an adult dog: Adult dogs need less of your time and attention once they have gotten used to their new family. Adult dogs are easier to see how they interact with children. At animal shelters an adult dog may have a history which helps to know what age range they suit.

Getting a dog when there is a baby in the house or introducing your newborn to a dog that is already in the house could be hard. Imagine having a newborn baby and a puppy at the same this would be very hard work. Imagine having a dog and then one day bringing home a baby and introducing them to that baby. The dog would most probably feel left out as the new baby would be getting all the attention with cuddles and could feel jealous. If you have a dog and a newborn (or an older baby) then you need to follow these helpful tips.

3. Don’t let your baby pull your dogs fur or do anything else to it that it may find upsetting. This could lead to the             dog being scared of the child for life.

Another thing you should do to make sure there is a great relationship between your dog and your new baby is to make sure you pay lots of attention to your dog to help them be less jealous of the new baby.

Just as you need to watch dogs with babies you also need to watch them with toddlers and preschool children who are more on the move and can now chase a dog who may have had enough. Toddlers have no idea of the dangers of being around a dog and could treat the dog badly. Young children from the ages of 3-4 have less control of their anger and also of their impulses and could hurt a dog and not realize it. Young children this age should be supervised all the time around dogs whether they are your dogs or other people’s dogs.

If you are thinking about getting a dog who will grow up with your toddler then you need to make sure it isn’t a small dog like a toy dog or a small breed dog.

You would think a smaller dog would be better but its not. The reasons are because your toddler could unintentionally hurt a small dog as smaller dogs are more nervous around small children who can often be unpredictable and the dog may then snap. Smaller dogs also don’t like loud noises or lots of activity and could snap or even bite if they felt threatened.

It would be better to pick a medium sized dog as they are more stable and have better temperaments. They are also less likely to be injured by a toddler who may be too rough.

Bigger dogs can also tolerate rougher play and noise that comes with having children. You should not get too large a dog as they could make a child feel threatened or accidentally knock the child over. 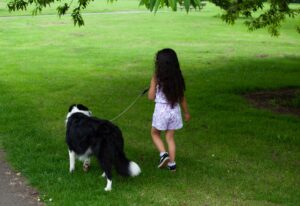 Image by TheOtherKev from Pixabay

Young school age children and pets
The next age to consider a dog is a child between the ages of 5 to 10. Kids this age may be ready for a pet but you need to be ready to realize they won’t be able to look after the dog by themselves just yet. Waiting until your youngest child turns 5 before you get a dog is also a good idea as they will understand much more and will be less likely to hurt the dog.
Kids between the ages of 5-10 will need to be supervised with the dogs feeding, washing and grooming etc. Holding the dogs leash whilst out on a walk will also depend on the child’s age, size and strength. 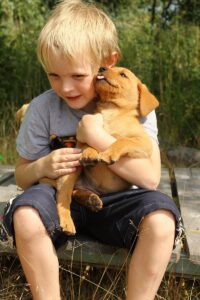 Older school age children (including teenagers)
If your older child (like a older primary student or a high schooler) wants a dog they will be more likely to be responsible to help look after it but I would not count on not having to look after the dog some of the time (or a lot of the time). This is because they may also be hanging out with their friends or have other groups and commitments so you will need to consider you may still be doing a lot of the responsibility of looking after the dog. 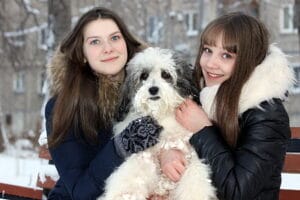 So getting a dog for you and your family is a very big decision for everyone involved.
Depending on the child’s age you could also discuss with them about getting a dog.  Getting a dog for your family will have lots of pros and cons as we have looked at above.
You will need to consider your child’s age and this may also affect what breed you chose for your family. You will also need to think about the fact that you may have most of the responsibility even with an older child.  Saying this having a dog in the house would be a great thing for you and your family and dogs are so lovable and loyal that they would make a welcome addition to any family.
I hope you enjoyed this article. For more how to articles click HERE
Share
Email
Prev Article 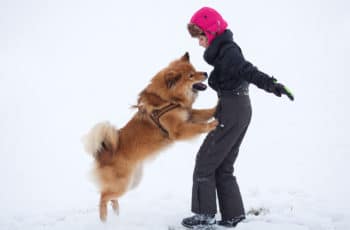 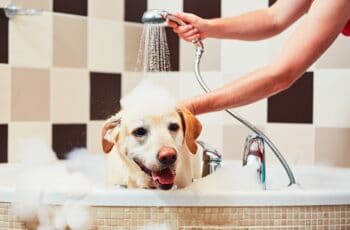